The Cooper/Eromanga Basins are the premier onshore oil and gas producing basins in Australia. The Cooper Basin is a Permo-Carboniferous to Triassic basin with sediment up to 2,500 metres thick which consists of interbedded sandstones, shales and coals. The overlying Eromanga Basin is Early Jurassic to Late Cretaceous in age and has sediment up to 3,000 metres thick which consist of sandstones, siltstones and shales. Over 2,500 exploration and development wells have been drilled in the Cooper/Eromanga Basins to date with estimated cumulative production of over 6.2 Tcf of gas, 315 MMbbl of oil and 92 MMboe of condensate. 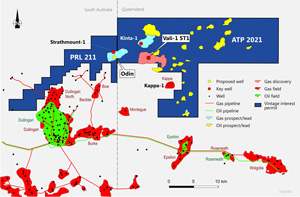 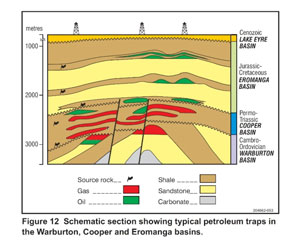 The Cooper/Eromanga Basins are connected to the Adelaide and east coast markets via gas pipelines, with oil and liquids pipelines connecting the region to Port Bonython in South Australia and Moonie/Brisbane in Queensland.

The Vali-1 ST1 well was drilled during December 2019 and January 2020 and discovered gas in the primary Patchawarra Formation target. The well reached a TD of 3,217 metres MD, in basement, on 10 January 2020. This was followed by an evaluation program that included wireline logging, the gathering of formation pressure data and the sampling of formation fluid. Analysis of the data gathered indicated the discovery of over 80 metres of interpreted log net gas pay (porosity cut-off of 6%) over a gross 312 metre interval in the Patchawarra Formation target. The Patchawarra Formation was the primary target for the well.

As with similar wells in the Cooper/Eromanga Basins, stimulation is a method to increase permeability and flow rates in the Patchawarra sandstones. Potential gas pay was also calculated in the secondary Toolachee target and the Triassic age Nappamerri Group, with oil shows observed in the Jurassic age Westbourne and Birkhead formations. In addition to recovering gas from the Patchawarra Formation via MDT sampling, gas was also recovered from the Nappamerri Formation. The Vali-1 location is mapped at the edge of, or just outside of structural closure for these reservoirs, indicating significant gas and oil potential as mapped up-dip of the Vali-1 location at these levels. There are also numerous Jurassic structures mapped within the permit which will now be high-graded due to the strong indications of oil migration into the Jurassic level in this well.

Fracture stimulation work was undertaken by Condor Energy Services Pty Ltd (“Condor”) in July 2020, with six stimulation stages placed, five in the Patchawarra Formation and one in the deeper Tirrawarra Sandstone. This was followed by a flow test of the Vali-1 ST1 well, with a stabilised raw gas rate, over a two-day period, of 4.3 MMscfd observed through a 36/64“choke at 942 psi (flowing well-head pressure). Analysis of the flow test results is underway to convert resources to reserves and a development concept for the Vali Field has been completed and estimates a field life of around 20 years.

ATP 2021 is a 370 km2 permit, located on the Queensland side of the Cooper/Eromanga Basins, which was identified as a prospective permit with multiple leads and prospects mapped using historic 2D and recent 3D seismic data. The permit is adjacent to a number of gas and oil fields, and associated pipelines with facilities, that have produced over 600 Bcf of gas and 11 MMbbl of oil. The target zones within the leads and prospects in the permit are Permian gas and Jurassic oil reservoirs, which have historically been the main producing zones in the Cooper/Eromanga Basins.  ATP 2021 represented an excellent entry for Vintage into the prolific Cooper/Eromanga Basins.

Vintage has a 50% interest and operatorship in ATP 2021, which was achieved through the following steps:

The Vali structure is a robust Permian anticlinal closure, some 10km2 in area, located in the southern part of the permit. Permian Toolachee and Patchawarra formation sandstones within the closure are proven producing reservoirs on the southern flank of the Nappamerri Trough. The Vali structure was identified on the 2016 Snowball 3D seismic survey and is approximately three kilometres from Kinta-1, a well drilled in 2004 that intersected gas charged sands in the Patchawarra and Toolachee formations.

Post drill volumetric assessments for the discovery were completed, with ERCE independently certifying 37.7 Bcf (gross) 2C Gas Contingent Resources in the Patchawarra Formation of the Vali gas field, which was estimated from over 80 metres of interpreted log net gas pay (porosity cut-off of 6%) over a gross 312 metre interval in the Patchawarra Formation. Potential exists to increase the size of resource with further testing/drilling addressing possible pay in the Toolachee Formation, Tirrawarra Sandstone and Nappamerri Group.

1. Contingent Resource volumes have shrinkage applied to account for CO2 and include only hydrocarbon gas. No allowance for Fuel and Flare has been made. 2. ERCE GIIP volumes and Contingent Resources presented in the tables are the probabilistic totals for all 19 Patchawarra reservoir intervals. 3. Probabilistic totals have been estimated using the Monte Carlo method. 4. Estimates for contingent resources have not been adjusted for development risk; 5. The resources have been classified and estimated in accordance with the PRMS. 6. These resource estimates are as of 2 March 2020 and first disclosed in an ASX release on 3 March 2020. 7. Vintage is not aware of any new data or information that materially affects the estimate above and that all material assumptions and technical parameters continue to apply and have not materially changed.

Vintage executed a binding farm-in agreement for PRL 211 on the South Australian side of the Cooper/Eromanga Basins. Under the proposed joint venture, Vintage will become the operator with Senex to be free carried through the drilling of the first well. PRL 211 is a 98.49 km2 retention licence that is close to infrastructure and has an initial five-year term expiring in October 2022, with an option to renew the permit for a further five years. The licence is located immediately adjacent to ATP 2021.

The main target in PRL 211 is the Odin structure, which is fully covered by recent 3D seismic and has gas potential in the Patchawarra and Toolachee formations. Odin is located on the southern flank of the Nappamerri Trough near the producing reservoirs at the Bow, Beckler and Dullingari gas fields and is immediately adjacent, and similar in form, to the Vali gas discovery. Stratigraphic upside, like that seen in the Beckler-Bow field area, is also possible at Odin. The Odin prospect straddles the border between PRL 211 and ATP 2021.

Under the terms of the farm-in, Vintage, Bridgeport and Metgasco will drill a well into the Odin structure (with Vintage paying 50% of the estimated cost of the well – approximately $2.25 million contribution by Vintage for 42.5% equity). All further work, including the potential to stimulate and flow test the Odin well, will revert to the equity share of the joint venture. Drilling of the Odin well is targeted to take place in 2021.

The farm-in is subject to a number of conditions, including Ministerial approvals, confirmation that PRL 211 will remain part of Senex's PRL scheme group, the farm-in parties demonstrating that between them there are sufficient funds available to drill the well, and negotiation and execution of formal farm-in and joint venture documents.

Notes:
1. Net to Vintage is the total of 42.5% of the prospective resources in PRL 211 2. The estimated quantities of petroleum that may potentially be recovered by the application of a future development project(s) relate to undiscovered accumulations. 3. These estimates have both an associated risk of discovery and a risk of development. 4. These prospective resources are estimated as of 14 October 2019 and first reported to the ASX on 22 November 2019. 5. Further exploration, appraisal and evaluation is required to determine the existence of a significant quantity of potentially moveable hydrocarbons. 6. The resources have been classified and estimated in accordance with the Petroleum Resource Management System (PRMS). 7. The prospective resources have been estimated based on the interpretation of 3D seismic integrated with offset well data. Probabilistic methods have been used to estimate the prospective resource in individual reservoirs and the reservoirs have been summed arithmetically. 8. Vintage is not aware of any new data or information that materially affects the estimate above and that all material assumptions and technical parameters continue to apply and have not materially changed. 9. It is expected that the prospect will be drilled in the second half of FY21, following seismic reprocessing and mapping that confirmed the optimal well location. This reprocessing work did not change the volumetrics. 10. Resource estimates are net of shrinkage.

Vintage was successful in bidding for Block CO2019-E (“PELA 679”) in the south west of the Cooper Basin in South Australia. PELA 679 forms one of five hydrocarbon exploration licence blocks released for competitive bidding by the South Australian Department of Energy and Mining in 2019. Once an appropriate land access agreement is in place with the Dieri Aboriginal Corporation RNTBC and the State Government, Vintage will have a 100% interest in the permit, which will provide options relating to the financing of the firm work program through the potential introduction of a joint venture partner/s.

PELA 679 has both Permian and Jurassic oil potential, with cumulative oil production of 4.5 MMbbl from two nearby fields, one being the Worrior Field immediately to the north east. The permit covers a total area of 393 km2 and has primarily been targeted for oil exploration. Seismic data is limited with the majority being poor quality 2D.

The first exploration well in the region was Pando-1 which was drilled in 1966 and tested for oil and gas within a large four-way closure. Despite suppressed Jurassic oil shows, the well was plugged and abandoned, with Stuart Petroleum Ltd drilling the Worrior-1 wildcat 37 years later, 750 metres to the south east of Pando-1. 50 km2 of 3D seismic and ten development wells have resulted in production in excess of 4 MMbbl of oil to date from the Worrior oil field (Senex Energy 70%, Cooper Energy 30%), primarily from the McKinlay Member, Birkhead Formation and Hutton Sandstone.

The committed work program for the permit over the initial five year licence term includes geological and geophysical studies comprising maturity studies, petrophysics and a rock physics trending study, acquisition of 100 km2 of 3D seismic and drilling of two wells.

Vintage has identified three Jurassic four-way closures and one Permian Patchawarra Formation stratigraphic play from the sparse 2D seismic it has mapped to date. The “morphology” of Basement-influenced Jurassic structures located up-dip and along trend of Permian stratigraphic hydrocarbons, is analogous to Beach Energy Ltd’s prolific Western Flank play, where the Pennington Oil Field and ultimately the Bauer Field are up-dip of Permian stratigraphically trapped gas of the Udacha and Middleton Fields.