The Galilee Basin is an onshore basin located in central Queensland and covers an area of ~247,000 km2. It lies adjacent to two major producing basins in the Bowen and Cooper basins. The Galilee Basin is prospective with only 10 deep exploration wells drilled since the 1950’s. No economic discoveries have been made to date from this limited exploration, however, numerous oil and gas shows have been encountered. These shows, including in the Lake Galilee Sandstone, are an indication that an active petroleum system exists.

The basin is near the proposed extension of Jemena’s Northern Gas Pipeline from Mt Isa to Roma as well as the recently sanctioned Adani coal mine, which may require gas to power its operations.

Onsite operations at the Albany gas field have been suspended, with all operational activity, including stimulation testing at Albany-1 ST1, on hold.

Vintage signed a farm-in agreement with Comet Ridge Ltd to earn a 30% staged interest in the “Galilee Basin Deeps Joint Venture” to investigate reservoir sequences of the Galilee Basin within permits ATP 743, ATP 744 and ATP 1015. 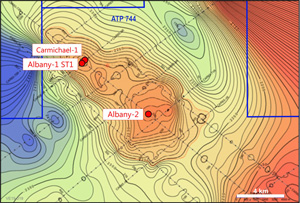 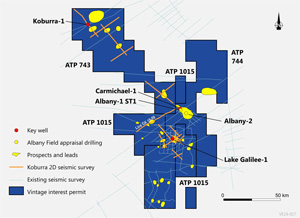 The joint venture is focused on the ‘Deeps’ within each of the Petroleum blocks, which is defined as including all strata commencing underneath the Permian coals (Betts Creek Beds or Aramac coals) with the main target being the Lake Galilee Sandstone sequence. The technical and commercial work undertaken by Comet Ridge has highlighted the potential of this largely ignored Galilee Basin sandstone conventional gas target. Gas has already been discovered in the Galilee Basin and, with future appraisal success, the basin could quickly become a significant contributor to the East coast gas market. 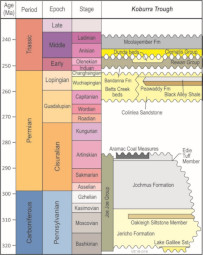 The area is lightly explored with little seismic and only three deep wells drilled within the permits. However, the Lake Galilee Sandstone sequence has flowed gas to surface from Lake Galilee-1 (1964) and Carmichael-1 (1995), which were drilled targeting oil. The application of the latest technology and the utilisation of air/nitrogen drilling has already resulted in successful flow of gas to surface through Albany-1. 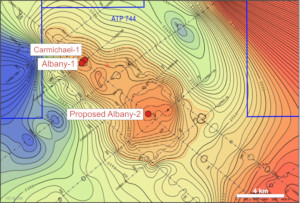 The Contingent Resources for the Albany (Carmichael) structure referred to in Table 1 are taken from an independent report by Dr. Bruce McConachie of SRK Consulting (Australasia) Pty Ltd, originally released to the market in Comet Ridge’s announcement of 5 August 2015. Estimates are in accordance with the Petroleum Resources Management System (PRMS) (SPE, 2007) and Guidelines for Application of the PRMS (SPE, 2011).  Probabilistic methods were used. Following the drilling of the Albany-1 well, SRK is of the view that the measured gas flow rate endorses their previous estimate of the range of Contingent Resources.

The key to unlocking this potentially valuable resource is obtaining a commercial flow rate. The staged work program is designed to address this issue on the Albany structure and further define other opportunities around the permits. The program commenced in May 2018 with the drilling of one conventional gas appraisal well (Albany-1) on the Albany structure, close to where the Carmichael-1 well flowed gas in 1995. The well was designed so that the prospective section would be drilled with air/nitrogen rather than conventional drilling mud, to enhance the potential flow rate from the sandstone. Vintage funded the first $3.35 million of this stage (Stage 1a) to earn a 15% interest in the “Deeps” across the three Galilee permits.

The well was drilled to a depth of 2,595 metres and penetrated 13 metres of the “B” sand which flowed gas continuously for 23 hours. The flow was diverted to the testing equipment where a stabilised rate of 230,000 scfd was measured over a period of 1.5 hours through a 1¼” orifice plate, with no formation water recovered. Further drilling through the Lake Galilee Sandstone was prevented by mechanical problems and the well was TD’d.

The operator, Comet Ridge, released an ASX statement dated 28 June 2018, regarding the status of Albany-1. Comments from the Managing Director include: 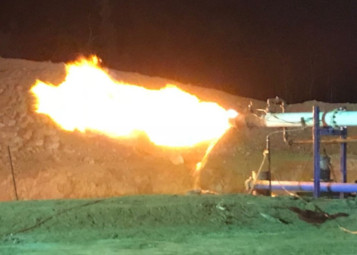 The joint venture was pleased that all the above objectives were met as detailed in the various categories below.