The Otway Basin is a rift basin located in onshore and offshore South Australia, Victoria and Tasmania. It extends for 500 kilometres and covers the area from the west of Melbourne to Cape Jaffa in South Australia, to the north of King Island in the south. Major producing projects in the basin are situated offshore Victoria/Tasmania and include Beach Energy’s Otway Gas Project (Thylacine and Geographe fields) and the Halladale, Blackwatch and Speculant fields, as well as Cooper Energy's Casino, Henry and Netherby fields. Gas has also been produced from the Katnook, Ladbroke Grove and Haselgrove fields in the onshore Penola Trough in South Australia. The basin is relatively under-explored by international standards, with potential for further gas discoveries in the Penola Trough and the offshore areas of the basin. 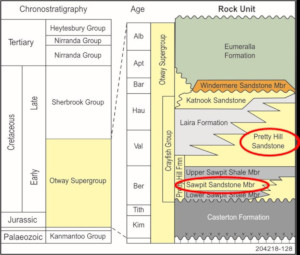 Currently, the basin is serviced by three main processing facilities near Port Campbell in Victoria (Otway, Minerva and Iona gas plants). In South Australia, the Katnook gas processing plant is located near Penola and is connected to various industries in the region and to Mt Gambier. All facilities are connected to the SEA gas pipeline which sends gas to both Melbourne and Adelaide.

Over 70 Bcf of gas and 0.4 MMbbl of condensate has been produced from the Pretty Hill Sandstone reservoirs in the Penola Trough, which has been supplied to local industry and the Ladbroke Grove power station (commissioned in 2000).

Easternwell Rig 106 spudded the Nangwarry-1 well on 1 December 2019, with total depth (“TD”) of reached at 4,300 metres measured depth (“MD”) in the Pretty Hill Formation. The fully automated capability of the rig improved the efficiency of the drilling process, with drilling finishing ahead of schedule.

A recoverable CO2 booking for the Nangwarry-1 discovery was recently estimated by ERC Equipoise Pte Ltd (“ERCE”) by using a method consistent with the PRMS methodology. Under PRMS, volumes of non-hydrocarbon by-products cannot be included in any Reserves or Resources classification. ERCE assessed the sales gas volumes attributable to the Nangwarry-1 discovery using a methodology consistent with that prescribed by the PRMS, with its independent assessment of a Best Case 25.1 Bcf gross recoverable CO2 made for the top Pretty Hill Sandstone of the Nangwarry CO2 discovery (12.6 Bcf net to Vintage).  This compares extremely well with other commercial Otway Basin CO2 fields such as Caroline (~15 Bcf), which was in production for approximately 50 years, and Boggy Creek (~14 Bcf).

Notes:
1. As at 31 August 2020 and first detailed in the ASX release of the same date. 2. Recoverable CO2 and Contingent Resource estimates reported here are ERCE estimates. 3. Gross Contingent Resources represent a 100% total of estimated recoverable hydrocarbon volumes. 4. Resource estimates have been made and classified in accordance with the PRMS guidelines and methodology. 5. Recoverable CO2 estimates have been made and classified using a method consistent with the PRMS guidelines and methodology. 6. Net recoverable CO2 attributable to Vintage represents the fraction of gross recoverable CO2 allocated to Vintage, based on its 50% interest in PEL 155. 7. Volumes reported here are “unrisked” in the sense that no adjustment has been made for the risk that the project may not be developed in the form envisaged or may not go ahead at all (i.e. no Chance of Development factor has been applied). 8. Chance of Development for the recoverable CO2 has been estimated to be 75% by Vintage and agreed by ERCE. This is based on the ability to establish a skid mounted processing facility at the well-head, adequate road access for trucks to transport the CO2 to market, similar reservoirs developed nearby such as Caroline-1, and high downstream demand for food grade CO2. 9. Hydrocarbon Contingent Resources have been sub-classified as “Development Unclarified” under the PRMS by ERCE and are assigned as Consumed in Operations, that is used as fuel for the CO2 plant. The key contingencies are a final investment decision on development, committing to a CO2 sales agreement, any other necessary commercial arrangements, and obtaining the usual regulatory approvals for production.10. Recoverable CO2 volumes shown have had shrinkage applied to account for methane and include only CO2 gas.11. Recoverable CO2 and Contingent Resources presented in the tables are the probabilistic totals for the Pretty Hill Sandstone reservoir interval. 12. Probabilistic totals have been estimated using the Monte Carlo method.13. Vintage is not aware of any new data or information that materially affects the estimate above and that all material assumptions and technical parameters continue to apply and have not materially changed.

An extended production test of the Nangwarry-1 well is currently being designed and targeted for the end of 2020. Discussions are progressing with a number of parties interested in the various stages of development, production, and purchase of Nangwarry CO2.

Vintage acquired a working interest in PEL 155 in the Otway Basin by way of a staged farm-in agreement with Otway Energy Pty Ltd, a wholly owned subsidiary of Lakes Oil Ltd (“Lakes”). The joint venture has drilled the Nangwarry-1 well, a CO2 gas discovery, which is located approximately 40 kilometres north of Mount Gambier.

The South Australian Government's PACE gas grants were an initiative designed to further accelerate investment in gas projects in South Australia through targeted competitive grants. The $4.95 million grant has been applied to the drilling of Nangwarry-1. Vintage and Lakes contributed to the cost of drilling Nangwarry-1 on 50:50 basis, with the grant proceeds shared on the same basis.

The Nangwarry CO2 field is a three-way dip, fault dependent trap in the Pretty Hill formation and is defined on 3D seismic.

In June 2020, the Victorian Government legislated that the moratorium, banning any petroleum exploration and production in the onshore areas of Victoria will be officially lifted from 1 July 2021. On that date the first five-year term of the PEP 171 licence will be restarted. New regulations are being drafted and an updated exploration program will be proposed and negotiated with the regulator prior to the restart of the licence.

Vintage executed a formal farm-in agreement with Somerton Pty Ltd (a subsidiary of Cooper Energy Limited) on 21 February 2019, which replaced the previously executed Heads of Agreement and, on execution of the Joint Operating Agreement, Vintage became the operator of PEP 171.

PEP 171, comprising an area of 1,974 km2, was awarded in August 2013 for a period of 5 years.  Following the first term there is a right to one renewal with a 50% relinquishment.  The Victorian Government imposed a moratorium on onshore gas exploration upon the year 1 program being completed. With the Government recently announcing a lifting of the onshore gas exploration and production moratorium, there will be a re-start of the exploration licence on 1 July 2021 which will allow Vintage to actively pursue opportunities in this permit from that date.

A revised work program will be negotiated with the regulator, essentially involving the acquisition of a 3D seismic survey to detail the most prospective leads and then the drilling of the best identified prospect.

Vintage is earning its initial interest of 25% by paying for costs associated with the permit through to the end of the onshore gas exploration and production moratorium period, as well as undertaking a prospectivity review as permitted under the moratorium. Vintage has the right to acquire a further 25% interest by contributing 65% of the cost of a 100 km2 3D seismic survey up to an agreed cap.

The prospectivity of the Penola Trough has been greatly enhanced by the new field discovery in the Sawpit Sandstone made by Beach Energy at Haselgrove‑3/ST-1. This well was drilled in a nearby licence in late 2017. Beach Energy reported a gas column extending over a gross interval of 104 metres, of which 25.6 metres is net gas pay. The well was production tested and flowed at a tubing constrained rate of 25 MMscf/d through a 36/64” choke at a well head pressure of 2,700 psi. In addition, a gross gas column of 11.6 metres was intersected in the shallower Pretty Hill Sandstone, with estimated net pay of 8.5 metres. This well represents a significant new play discovery and has stimulated a renewed phase of exploration in the region.

Following the results of the 2017 Haselgrove-3/ST-1 gas discovery, attention has refocused on the results of the Glenaire-1/ ST- 1 well drilled in PEP 171. This well encountered good gas shows in the Laira Formation and Pretty Hill Sandstone during drilling in 2006. A thickness of 8.8 metres of net gas pay was interpreted in the Pretty Hill Sandstone and a test in the Laira Formation recovered 12 barrels of oil but the well was considered uncommercial. The plan is to correlate the existing seismic between Glenaire-1/ST-1 and Haselgrove-3 ST-1.

Nine leads are currently recognised in the permit and are primarily fault-bound, dip closures, however the seismic data quality is poor to average, particularly deeper in the section, requiring the 3D survey to identify the optimum drilling location.

A Gas Storage Exploration Licence (“GSEL”) was granted to Vintage covering a portion of the South Australian Otway Basin to the south of PEL 155.  To date, activities have been limited to technical evaluation, analysis, and review of potential gas storage options, which include the commercial aspects of those options.